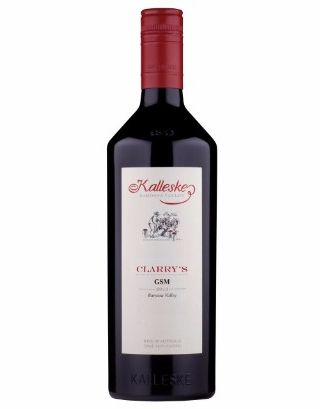 The hallmark of this well balanced wine is the purity of fruit, respected by limited maturation in seasoned barrels. Very drinkable, this GSM is completed by a lengthy finish. This is an approachable, fruit-driven and opulent wine that is best enjoyed now or over the next five years.

VINEYARD: The 2014 Clarry’s is a blend of Grenache, Shiraz and Mataro, with all grapes from the Kalleske’s organic farm. The Grenache is from low-yielding sandy soils from vines dating back to the 1940s, while the Shiraz and Mataro are sourced from a number of select blocks on the Kalleske estate with soil generally consisting of shallow, sandy loam over superb deep red clay and limestone, providing ideal conditions for these vines.

GROWING SEASON: Vintage 2014 was an excellent year. The wines from 2014 are strong with deep and vibrant colour, excellent fruit definition and solid but integrated tannin structure ensuring longevity for the wines. The 2014 growing season began with slightly above average Winter rainfall however Spring and early Summer were very dry with 40% less rain than normal. Temperatures were also up with the Spring/Summer growing season being an average of 2 degrees C warmer. However, this dry and warm season changed dramatically in mid February with 100mm of rain falling, the wettest February day in 45 years. This slowed the ripening of the grapes considerably and combined with average mild temperatures in March (25.7 degrees C) a steady ripening of the grapes ensued. This ensured good flavour and moderate sugar development producing outstanding quality.

WINEMAKING: The Grenache and Mataro blocks were harvested from late March to late April, and the Shiraz blocks were picked over four weeks through the month of March. All varieties were fermented separately in open top fermenters with hand pump-overs twice a day during fermentation. After seven to fourteen days on skins the fermented grapes were traditionally pressed. To preserve the superb fresh fruit flavours of the Grenache, Shiraz and Mataro, wines were only aged in very old oak hogsheads and only for a limited time of six months. On completion of maturation, components were blended for balanced flavour, texture and complexity.