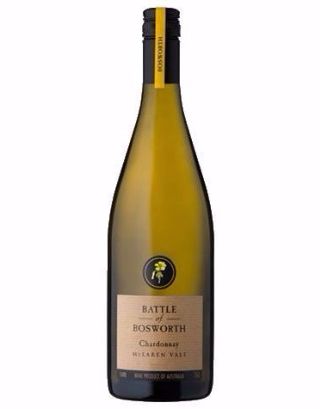 The folk at Battle of Bosworth aren't afraid of flavour and generosity here; this is a wonderful rich Chardonnay with balance and excellent length. It tastes great and has oodles of complexity. Stone fruit (peaches mainly) dominate and the oak while significant is balanced and integrated.

VINTAGE: Vintage 2014 was a season of extremes for us all in McLaren Vale. We had great winter rains which gave us a full soil moisture profile in time for a dry and windy spring. They don’t call it windy Willunga for nothing. If we’d had a set of wind chimes on the property, we would have heard them all day and night from September to January. We had a series of very hot days in January, followed by about 45mm of rain over a 48 period in early February which slowed ripening of our red grapes right down. We had picked all of our white grapes prior to the rain ‘event’ and so we had a decent break between whites and reds, like the good old days. There was no splitting of any of the grapes left on the vine after the rain, mercifully, either. Joch’s analysis of 2014 is that it was a gentleman’s vintage – everything came in slowly and in order, not like the mad rush of 2013. Every vintage is different; truism of our time, and of our industry.

WINEMAKING:  This is winemaking when you don’t care about the cost; best French oak, wild ferment, vineyard selection of the best Chardonnay from our vineyards (all of our Chardonnay is good, of course…) and Joch singing lullabies to the ferment during its gentle progress. I’m joking about the last bit, Joch can’t sing. Chardonnay is pressed straight to barrel, and undergoes a natural ferment (that is, we don’t inoculate with commercial yeast but we allow the ferment to proceed using the indigenous yeasts which occur naturally in the vineyard). We leave the wine on high solids (all the bits of yeast and stuff) and this lets the wine develop depth and complexity. We stop the wine going through the secondary malolactic fermentation, to help retain the natural acidity.

The wines take their name from the original Battle of Bosworth, fought on Bosworth Field, Leicestershire, England in 1485. Here the last of the Plantagenet Kings, Richard the III, was slain by Henry Tudor, becoming the last king of England to die in battle. His death ended the War of the Roses.

Organic farming is based on minimising the use of external inputs, and as such our certified organic grapes are grown and processed without the use of synthetic chemicals or fertilisers. Our system of organic viticulture at Battle of Bosworth works with nature rather than against it, and by keeping harmful chemicals out of the land, water and air, helps creates a healthy environment rich in flora, fauna and nutrients; the perfect environment for growing the very best quality wine grapes.

Battle of Bosworth grows Shiraz, Cabernet Sauvignon, Petit Verdot, Chardonnay, Semillon, Viognier, Sauvignon Blanc and Mourvèdre (as well as some Touriga Nacional and Graciano) which are fully certified ‘A’ grade organic by Australian Certified Organic (ACO), a process that takes four years. The vines are all now 20 years and older.