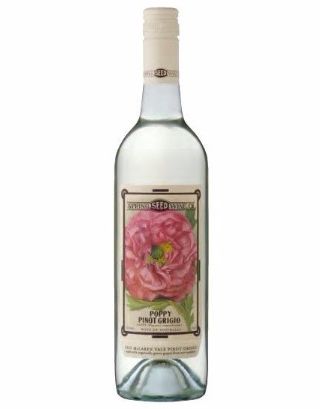 PREVIOUS VINTAGE NOTES
‘Poppy’is light and fresh with a gentle nose of nashi pear and citrus, and a silky smooth palate. Serve as an aperitif, or eat with Spaghetti alla Vongole or, if you’re struggling to find some Greek wine in your cellar, our Pinot Grigio will step up admirably when matched with Taramasalata. Light pasta dishes and mild cheese will go well with the Poppy too.

Spring Seed Wines are made from grapes lovingly grown in our family’s organic vineyard, located in the premium wine region of McLaren Vale, South Australia. The vineyard was established in the early 1970’s by Peter and Anthea Bosworth, and is now owned and run by their son Joch, who began the conversion to organic viticulture in 1995. The vines are fully certified ‘A’ grade organic by Australian Certified Organic, a process that takes four years and involves yearly audits and random sampling of produce.

The Spring Seed Wine labels are unashamedly inspired by vintage flower seed packets created at the turn of the last century. The colour, clarity and beauty of the original seed packets are quite remarkable. We have chosen the Poppy, Alyssum and Sweet William flower images for our Pinot Grigio labels.

PREVIOUS VINTAGE NOTES
Vintage 2012: It is a massive truism, but really, every vintage is different. Vintage 2012 was condensed into about 8 weeks from go to whoa which meant we had finished crushing all grapes by the end of March. Generally this feat would only be accomplished by the middle to end of April. We had cool conditions up until the end of February then some rain, which did not affect things too much (see vintage 2011)as the whites were already picked and safely in the winery, and reds were unaffected.

Winemaking:Joch’s sensitive side came to the fore when making the Poppy – he made this wine in the Grigio, rather than the Gris style, i.e. We wanted to retain the fresh gentle aromas of the variety and make a light bodied, fresh wine as opposed to a heavier bodied Gris style (these are made in Alsace and tend to be rich, even oily wines.). To this end we picked the grapes early at about 12 degrees Beaume and allowed them a cool, temperature controlled ferment in a stainless steel tank. This Modus Operandi is critical in making sure the resulting wine is fresh and light. Poppy did not spend any time in oak barrels at all.