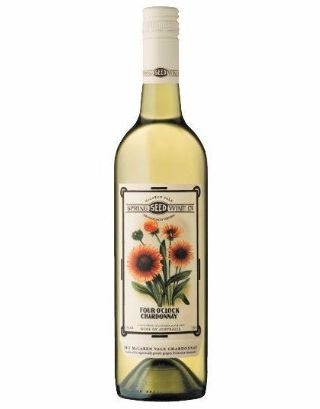 ‘Four O’clock’ is a vibrant, fresh Chardonnay with classic characters of stone fruit (nectarine and white peach) and citrus (lime and pink grapefruit) on the nose. The palate reflects the gorgeous characters you find on the nose. Spring Seed Chardonnay is clean, fresh and has wonderful persistence and length.

Spring Seed Wines are made from grapes lovingly grown in our family's organic vineyard, located in the premium wine region of McLaren Vale, South Australia. The vineyard was established in the early 1970's by Peter and Anthea Bosworth, and is now owned and run by their son Joch, who began the conversion to organic viticulture in 1995. The vines are fully certified 'A' grade organic by Australian Certified Organic, a process that takes four years and involves yearly audits and random sampling of produce.

The Spring Seed Wine labels are unashamedly inspired by vintage flower seed packets created at the turn of the last century. The colour, clarity and beauty of the original seed packets are quite remarkable. We chose three different flower images to adorn each one of our McLaren Vale, simply because they are quite lovely. The Four O'Clock Chardonnay displays the Four O'Clock (Mirabilis jalapa), Gaillardia (Gaillardia pulchella) and the Brachycome (Iberidifolia).

Vintage 2011: We had good winter rains after a few seasons of below average rainfall. 2011 was a late season: budburst was approximately 2-3 weeks late, and harvest started similarly behind the norm (we usually start picking Chardonnay in early/ mid February). This year we picked whites in late February/ early March. Unseasonal rains in March threw a spanner in the works somewhat, but luck and good management helped us dodge most of the bullets. Whites are terrific, as is the Cabernet Sauvignon and our best parcels of Shiraz are incredibly bright, balanced and reminiscent of our 1999 reds, which have incredible longevity. Overall this was a very long vintage with moderate yields which tested Joch’s nerves a little more than usual.

Winemaking: ‘Four O’clock’ is all about the art of blending different components of Chardonnay together from our vineyards, all of which have been made in subtly different ways. The aim is to make a wine which is greater than the sum of its parts. Some of the components are fermented in stainless steel, some finish their ferment in old oak barrels and some undergo a ‘wild’ ferment (they are fermented by the wild yeasts which are present in the vineyard). All wines are handled oxidatively, and are very gently pressed. We keep all batches of wine on solids after fermentation, to further protect them from oxidation. This also helps create a more complex wine. None of the batches were allowed to go through the secondary malolactic fermentation, and none were matured in oak.