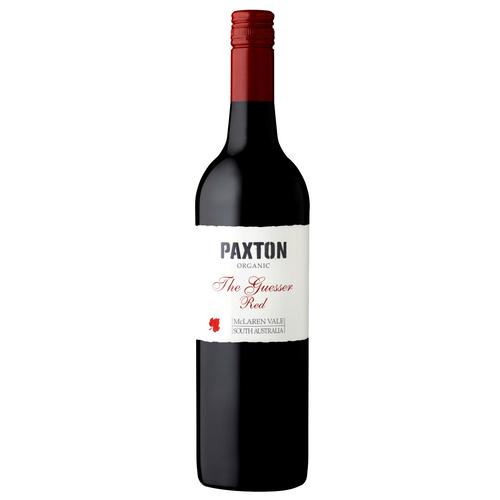 Vibrant aromas of red raspberry fruit and some floral notes with an earthy edge. The palate is soft and approachable with plums & spice, a hint of vanilla oak and very subtle tannins. Well balanced and extremely quaffable.

The Guesser Range from Paxton are blends that change every year depending on the bright fruit driven grapes available for that vintage. Drink-ability from a young age is the key and they are wines which always represent exceptional value for biodynamic quaffers.

Paxton The Guesser Red 2016 - Tasting Notes from the Winery

The 2016 Guesser Red is a blend of Shiraz, Cabernet Sauvignon, and Grenache. This wine drinks beautifully with structure from the Cabernet. It’s a great wine with an even better price tag. The Guesser has proven to be very popular choice in cellar door.

VINTAGE: 2016 was a very strong year in McLaren Vale. After 6 months without rain, we had 40mm in the first week of February. This slowed down the baumes and allowed the acidity to catch up, therefore giving the fruit fantastic flavour equilibrium. Berry numbers were high due to an even veraison, which lead to the highest quality crops and tonnages this millennium.

VINIFICATION: Selected batches of Shiraz, Grenache and Cabernet Sauvignon were fermented and aged separately in small French and American oak barriques. They were blended to achieve a fruit-filled wine, expressing a nose of Cabernet Sauvignon mid palate of Shiraz and finish of silky Grenache.