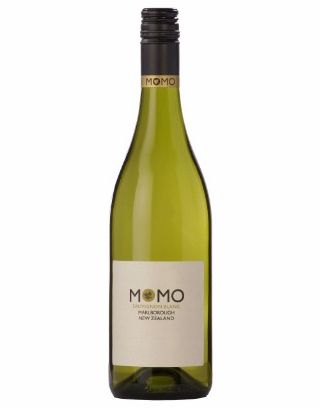 Displays a complex nose with aromas of tropical fruit, herbaceous notes and a hint of cassis. The natural fermentation adds a rich and textural quality to the palate, with subtle notes of lemon zest and passion fruit. The finish is crisp and dry. Delicious with all types of seafood and summer salads, or enjoy by itself as a refreshing aperitif..

BACKGROUND:‘Offspring’ in Maori, MOMO reflects its heritage as part of the Seresin Estate family - wines grown naturally to express the season and land from which they come.From these roots, MOMO has developed its own identity, embracing traditional winemaking to produce wines which are true to variety and reflect the essence of their fruit characters.

The 2013 MOMO Sauvignon Blanc is made from fruit grown in vineyards located on Seresin Estate in the heart of the Wairau Valley of Marlborough. The grapes were picked in the late evening and early morning, to ensure the fruit was cool when it reached the winery.
After fermentation at a low temperature to retain fruit character, the wine was allowed time sitting on yeast lees to give greater palate depth and complexity.

Reviews & Accolades for the 2013 Momo Sauvignon Blanc
Sam Kim, June 2014 - WINE ORBIT
4.5 Stars & 90/100
It's vibrant, racy and intense, filled with lemon/lime, stone fruit and dill characters and a hint of
flinty complexity on the nose. The palate is focused and linear, and offers beautifully long, mouth-
watering finish. At its best: now to 2016.