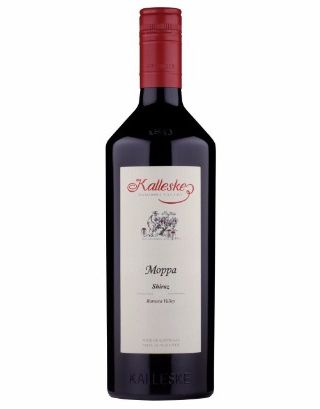 Michelle says The Kalleske Moppa Shiraz is a standout Barossa Shiraz by any standards. The Kalleske wines just get better with each vintage. This wine will impress and price-wise it is great value, comparing easily with $35+ bottles. Oh and it's biodynamic.

Moppa Shiraz 2013 is intense red-black in colour. Beautifully aromatic, this wine is lifted, bright and alluring. Emanating from the glass is fresh fruit cake, musk, anise, blueberry, all-spice, rose florals, milk chocolate and a hint of cinnamon spice. The fleshy palate is full-bodied and extremely mouth-filling. Rich red and blue fruits are intense and forthcoming. This purity of bright fruit is followed by subtle background oak. The tannins are extremely fine adding a seamless structured backbone. Stylish, harmonious and generous the wine is completed with a very lengthy finish.

Moppa 2013 is an expressive, plush and balanced Shiraz that can be enjoyed now or will cellar well in the medium to long term.

VINTAGE: Vintage 2013 was a great quality year. However, yields were very low as a result of a very dry season, with less than half the normal growing season rainfall. It was also warmer than average with the dry and warm conditions resulting in vintage being three weeks earlier than normal. Importantly though, quality was amazing. Wines are rich, mouthfilling and extremely lengthy.

VINEYARD: Moppa is predominantly Shiraz with a trace of Petit Verdot (10%) and Viognier (5%) blended in for added complexity. Grapes are from ten different blocks on the Kalleske’s organic farm, with the oldest of these blocks planted in 1961. The vines are low-yielding and are grown in shallow, sandy loam soil over superb deep red clay, providing ideal conditions for these varieties.

WINEMAKING: The Shiraz was harvested in numerous batches from February 18th to March 6th. The Viognier was harvested on February 25th and co-fermented with a portion of Shiraz. The Petit Verdot is a late ripener and was harvested on April 10th. All batches were wild fermented in open top fermenters with hand pumpovers twice a day during fermentation. After 7 to 14 days on skins the fermented grapes were traditionally pressed. The wine was aged in hogshead barrels for sixteen months. Approximately 25% new French, American, Hungarian and Russian oak was used with the balance seasoned barrels. On completion of maturation, a small portion of Petit Verdot and Shiraz/Viognier was blended for added complexity.

Gary Walsh www.winefront.com.au - Cute proprietary bottles, a la Rockford. Contains 5% Viognier and 10% Petit Verdot, so you can still call it just ‘Shiraz’ on the front label. On the back label, perhaps, “trace elements of Viognier may remain.” Black fruit with tar, chocolate and a perfumed top note. Full bodied, smooth with plenty of fine grained open tannin, fleshy feel, chocolate and roses with some salted beef coming through on the finish. Plenty of wine here. Hard to imagine fanciers of bold Barossa Shiraz not being happy with this wine.