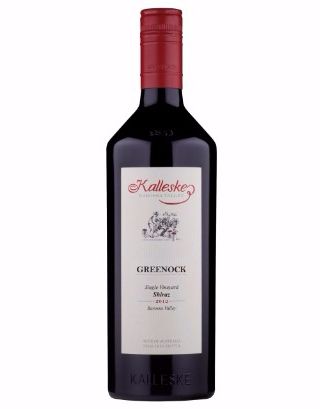 Greenock Shiraz 2012 is deep purple-black in colour. Bright and lifted, the bouquet displays characters of blackberry, cherry, fruit cake, ripe plum, mocha and oriental spice. These ripe black fruit flavours continue to the powerfully flavoured full-bodied palate. Driven by intense fruit purity, the palate is complimented with subtle oak barrel characters. The natural tannins are lightly chalky but fine adding structure to support the strong fruit. With layers of complexity this is a very pure but sophisticated wine of great balance that is completed by a solid lingering finish. Greenock is a complex Barossa Shiraz that has a long cellaring future.

Greenock Shiraz is a single vineyard wine produced from low yielding Shiraz vines on the Kalleske estate at Greenock, in the North-Western Barossa Valley. Cuttings for these vines originate from a vineyard planted on the property in the late 1800s. Today, sixth and seventh generation family members meticulously tend the vines. Traditional winemaking and eighteen months maturation in American and French oak hogsheads has ensured a complex, full-bodied Shiraz which will reward long term cellaring. Greenock Shiraz is a true family estate wine - grown, vintaged and matured on the Kalleske estate.

GROWING SEASON: Vintage 2012 was a fantastic year. The wines from 2012 are outstanding and up there with 2010 and 2002 as the best wines to come out of our Kalleske winery. Vintage 2012 began with a good growing season of moderate rainfall and normal temperatures. Summer and Autumn were perfect with generally warm sunny days and only a few heat periods but nothing extreme. The weather was generally dry with an occasional shower of rain refreshing the vines. The perfect mid-high 20s weather ensured the grapes ripened steadily and evenly producing outstanding quality.

VINEYARD: Kalleske Greenock Shiraz is sourced from a single vineyard, located on the Western edge of the Greenock Creek in the Northern Barossa Valley. The vineyard consists of shallow, sandy loam soil over superb deep red clay and limestone, providing ideal conditions for Shiraz vines.

WINEMAKING: The grapes were picked in separate batches over 8 days from February 29th to March 7th. All grapes come from the same individual vineyard, the “Greenock” block. After picking, the grapes were destemmed into open top fermenters. Each batch was fermented warm with hand pump-overs twice a day for 7 to 10 days on skins prior to pressing. After pressing off skins the wines were filled to a mix of 30% new and the balance used American and French oak hogsheads. The wines completed primary fermentation and underwent natural malolactic fermentation in barrel. The wine was matured in barrel for eighteen months prior to bottling.