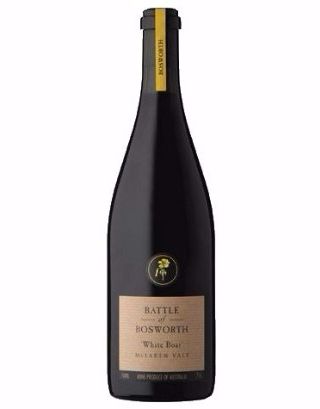 You will find star anise and other spice on the nose, as well as plums and red fruit. The palate is soft and grainy with excellent fruit tannin length. The win e is very, very long and persistent.

Cellaring potential? Years.
White Boar can be successfully served with hearty winter tucker; rich beef casseroles, Osso Bucco, or simply pour a glass and consume whilst sitting in a nice armchair next to the fire, with a cheese platter.

VINTAGE 2010:We recorded just about average annual rainfall over the year, which resulted in healthy crops of Shiraz and Cabernet. Unseasonably warm November weather interfered with the chardonnay during flowering and has resulted in small crops of this variety. The weather then remained almost perfect for the rest of vintage. The general consensus amongst winemakers in the Vale is that 2010 marks an exceptional year for both red and white wines.
WINEMAKING: White Boar is our tilt at producing an Amarone style red wine. Amarone is made in Italy using indigenous grape varieties. The grapes are harvested when ripe and dried on racks for several weeks before fermentation, making a rich, characterful wine. We have adapted the theory by actually drying our Shiraz and Cabernet grapes on the vine (after cutting the cordon) to achieve the same effect, but with more risk! Shiraz and Cabernet had their canes cut and were left to dry on the vines for approximately 12-14 days.

The drying process concentrates flavour, sugar and acid. Grapes were then hand-picked and fermented in old oak. These vine-dried concentrated wines are made as a blending component for the single vineyard Battle of Bosworth red wines. In 2010 we had enough left over to bottle a small volume of the White Boar.

“ Good hue; a 60/40% blend of shiraz and cabernet sauvignon; here the alcohol has been very deliberately built into the wine, the canes having been cordon cut and the bunches left to desiccate for two weeks before being picked; the wine is very complex, and it is only on the aftertaste that the high alcohol impacts. ” Drink Until 2025 89 pts James Halliday review July 2013 from winecompanion.com.au