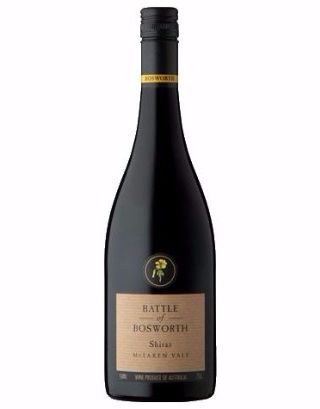 The Battle of Bosworth Shiraz is a mouth-filling middle weight wine; it is not a blockbuster, nor does it try to be. The nose shows red and black fruits, with some earth and a whiff of dark chocolate. The palate shows the same red and black fruits, with some blueberry too, and the wine finishes long and well-balanced. Drink with steak, game, osso bucco or on its own in a comfortable chair.

Vintage 2011:We had good winter rains after a few seasons of below average rainfall. This was a late season: budburst was approximately 2-3 weeks late, and harvest started similarly behind our standard season (we usually start picking Chardonnay in early/ mid February). This year we picked whites in late February/ early March. Unseasonal rains in March threw a spanner in the works somewhat, but luck and good management helped us dodge most of the bullets. Whites are terrific, as is the Cabernet Sauvignon and our best parcels of Shiraz are incredibly bright, balanced and reminiscent of our 1999 reds, which have incredible longevity. Now the wines are in bottle, there is no doubt that 2011 is a standout Cabernet Sauvignon and Petit Verdot year. Overall this was a very long vintage with moderate yields which tested Joch’s nerves a little more than usual.

Winemaking: This is the 11th vintage of the Battle of Bosworth Shiraz, which is pretty exciting for us. The style has not really changed since we started making this wine – we have always strived to make a mid-weight wine with moderate oak, and to allow the lovely McLaren Vale fruit characters to shine through. I think (notwithstanding the tricky vintage) we have comprehensively managed to do this. We take components for this wine off the heavy black cracking Bay of Biscay soils of our Braden’s vineyard, our home vineyard (from the Road block and the Hill block) as well as from the free draining stony loam soils of Chanticleer. The wine is traditionally made in open fermenters, and the ferment finishes in barrel. We use about 40% new oak barriques, the majority of which is from 3-4 different French coopers.

Campbell Mattinson » The Winefront February 20th 2012
"Organically grown and jolly delicious. Bright flavours of plum and asphalt, various spices and earth. Has a real vigour to it. Good depth of flavour too, without being syrupy or heavy. It’s not wimpy but you can drink it. Has an earthy goodness about it too. Benefits from a quick slosh in the decanter. Excellent red wine."
Rated : 92 Points
Drink : 2013 - 2019+