The Organic Spirits Company, based in the U.K., launched in January 2000 with Juniper Green Organic London Dry Gin. The gin went on to win the prestigious International Wine and Spirit Challenge in the United Kingdom, named the world's finest gin the same year it debuted. The following year, the company introduced Utkins UK5 Organic Vodka, and both products won first place in their categories at the International Spirits Challenge. It became apparent that the Organic Spirits Company was not only riding the wave of organics, but knew how to distil top-quality spirits." 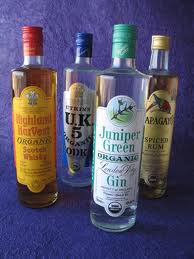 Effective from January 2007, Organic Spirits have been awarded the Prince of Wales's Royal Warrant by His Royal Highness Prince Charles, a prestigious honour indeed.